Settling in with U-Verse 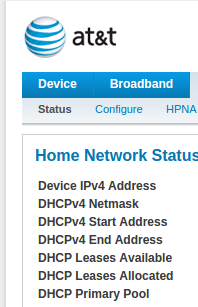 Monday will mark two weeks that we’re on AT&T’s U-Verse Business Internet service. We’ve had some ups and downs with getting the modem configured, but I think it’s all nailed down now. Initially, I charged straight ahead, setting up this router like any traditional router. It’s not, though. After a couple of days of weird behavior, I called tech support, and got some insight on the NVG589 from a very good tech. He explained that my problem was that the four additional fixed IP addresses were my culprit. AT&T issues static IPs in blocks of five. I set up the Ubuntu VMs for the web servers (three servers running Apache) with static IPs on the private network, but the modem kept wanting to give them the public addresses.

It turns out that the best practice for this router is to set up all the systems behind it for DHCP. When a particular MAC address connects and asks for an IP address, the router consults its “allocate” table. If a device isn’t there, it gets an address from the DHCP pool. If it is there, it gets the static address allocated to it. So, the Hyper-V server itself, along with the three Ubuntu VMs on it are all now set for DHCP, and they pick up the same IP address every time they connect. Port 80 is set via NAT to go to one of those, which in turn passes domains to the appropriate server of the other two.