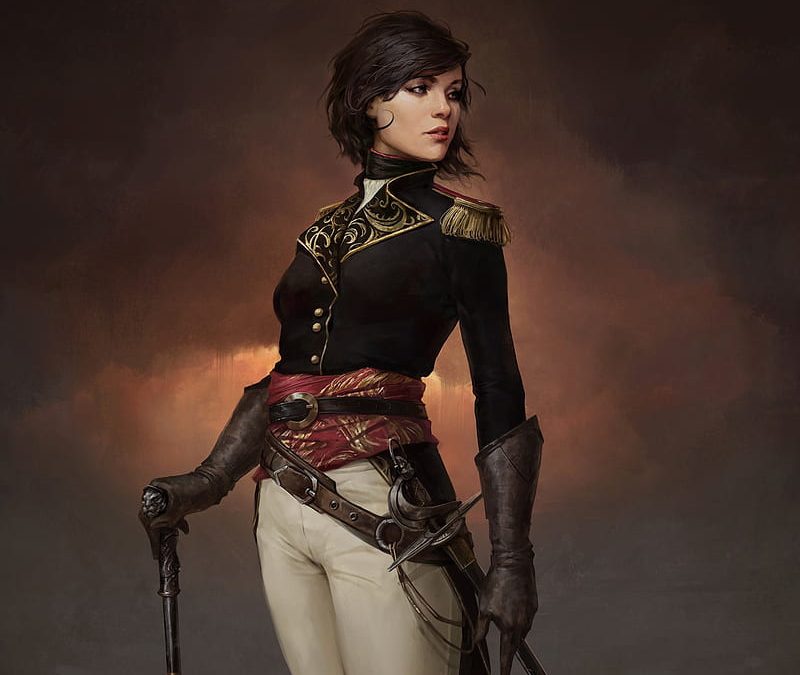 This lady speaks to me! A young woman in a naval uniform, with walking stick and straight sword. The gloves and high boots make this a “walking out” uniform rather than something worn for a social event. The artist is Sergey Gurskiy.

Annabel gives me Steampunk-y vibes. The style is Victorian, rather than Regency. The artist paints the uniform in a Continental style. While she’s clearly not wearing a British uniform, it’s subdued, in the Royal Navy style. Using a French or Russian uniform as the base would mean more gold lace.

I’m interpreting the epaulette in the British style. It rests on her left shoulder. That’s the position for a Master and Commander, rather than a Post Captain. An officer “made post” wore the single epaulette on the right.

Additionally, I don’t think Annabel is a wet-navy officer. I see this and think, she commands an airship. Maybe not a line-of-battle craft, but a small, nimble, patrol ship. Think HMS Hotspur, one of Hornblower’s early commands.

Annabel stands guard on my Google Pixel 4 phone. the portrait orientation fits better with the phone than a landscape monitor. In the style of a “duet” on TikTok, it would be fun to place this officer next to an airship of appropriate size. Then she can wind in and out of the sky, observing enemy positions and forces. She flies in the vanguard.

Of course, I have no idea if Mr. Gurskiy approves of such things. While TikTok’s TOS permits collabs, artists usually prefer to present their art as finished pieces.

My Google Pixel 4 performs well. While Twitter acts up since the latest Android upgrade, other apps do just fine. Additionally, T-Mobile works fine for me, with the exception of Uptown New Orleans. That’s not the phone’s problem. The service just sucks up there. I think it’s one of the reasons I shy away from coffee shops in that neighborhood.